For all the latest news and updates
from Kazakh Nomads

IMPORTANT NOTES: During this peak period, book your flights ASAP from Ulaanbaatar to Ulgii (West Mongolia) as flights are limited.

The Golden Eagle Festival became one of the main events to captivate photographers, researchers and travelers to Mongolia. The highlight of the trip takes place near the capital of Bayan–Ulgii province in western Mongolia.

History of Golden Eagle Festival During the communist period in Kazakhstan, many Kazakhs fled for Mongolia, settling down in Bayan Ulgii, an area that has been designated for the Kazakhs of Mongolia today. Kazakhs (Altaic Kazakhs or Altai-Kazakhs) living in Bayan-Ölgii Province of Mongolia continue to hunt with eagles today. There are about 250 eagle hunters around Bayan Ulgii province. Every year about 100 eagle hunters participate to this Eagle festival with their specially trained Golden Eagles.

The two-day event started in 1999 as a way to promote Kazakh heritage. At the time of creation, the festival saw the participation of about 40 eagle hunters. With now around 100, the festival has become one of the largest gatherings of Kazakh. Eagle hunters put their best costumes, with both the robust Mongolian horses and the full-feathered eagles wearing decorated tacks. Beyond the expert display of the hunter’s’ skills, both humans and birds, the festival also features traditional Kazakh games such as Tiyin Teru, Kyz Kuar, and Kukpar. In the evening, traditional Kazakh music and performances are held in downtown Olgii..

The festival became famous note after a documentary in 2016 called The Eagle Huntress, featuring 13-year-old Aisholpan, the first female to break the millennia-old tradition traditionally passed from fathers to sons. Not only did she enter the competition, but also won.  She has since opened the door to more young girls participating in Eagle hunting. She, as well as other girls, was present during the festival.

The Eagle festival, or Golden Eagle festival -is an annual traditional festival held in Bayan-Olgii province Olgii town in Mongolia. In the eagle festival, Kazakh eagle hunters celebrate their heritage and compete to catch animal fur from distance with specially trained golden eagles, showing off the skills both of the birds and their trainers. Prizes are awarded for speed, agility and accuracy, as well as for the best traditional Kazakh dress, and more

1. Golden Eagle Festival Opening Ceremony
The opening ceremony is introduced all hunters individually, each of them proudly holding their eagle high on their fists. After several runs at full gallops around the arena, the hunters gather together for visitors to take photographs.
Within seconds, hundreds of voracious photographers, professional and amateurs alike, surround the horses, hunters, and eagles. Each cutting in front of the other, tucking their long lenses in the faces of the participants. This lasts a while and feel like a zoo.
A photographers even stay in the arena as the competition starts.

2. Eagle Calling Event
The first day is mostly allocate for the eagle hunters to demonstrate the different aspects of the eagle training and hunting skills. The first competition is a calling event.
Three circles mark the field, each with varying numbers of points – 6, 8, and 10. The eagle is bring to the top of the nearby hill, while its hunter awaits on his horse in a given circle.
The eagle is let go, flying towards and landing directly on the hunter’s arm. The further the ring, the higher the point. Several confident hunters go to the circle 10.
Many of their eagles fly in a straight line to their hunters, while others take a longer road, checking nearby rocks for small rodents, or even disappearing high in the sky. during competition some eagles loose, fighting among themselves, or landing with another on a hunter’s arm. The younger hunters tend to use the lower numbers as they hone their calling skills.

Shyrga Tartu – Lure Grabbing
The next event is similarly calling the eagles from the top of the mountain. However, instead of landing on the hunter’s arm, the birds have to grab a piece of rabbit fur of rabbit tied on the rope and leave trailing on the ground behind the horse. In previous years, the horses were pulling actual dead rabbits or foxes, but the most recent version only uses the fur. The more experienced pairs of eagle-men hunters would succeed with the horse galloping at full speed. Less able ones would still their horses and await the eagle to land on the fur.

Urianhai Archery Competition
While the main event takes place in the arena, a contest of archery takes place all day long. With heavy bows and long arrows, these archers put on quite a show.
The morning of the second-day start by a continuation of the calling event, where only a few selected from the day before were able to participate. Only the best display of Kazakh horsemanship and hunting from the first day of Golden Eagle Festival compete on the last day.

Tenge Ily – Coin Grabbing
During this game, a coin is thrown, which riders pick it up from the ground while still on horseback. It is really impressive to see the riders throwing themselves toward the ground, pick a tiny object, and continue to ride at full speed.

Kyz Kuar – Girls Chasing and Whipping Boys
Also called the “Girl chase,” both man and woman are racing side by side on their horses. The man tries to escape the wrath of the women who whips him tirelessly. Some men are better at avoiding the whipping than others. Some women are better, or at least more eager, at “beating” than others. This event is hilarious, and you can tell that each pair is having fun.

Kukhbar – Goat Skin Competition
The game is a tug of war over a goat carcass between two riders on horses. It used to be an actual dead goat, but the more recent events use a woolen decoy. This game is probably the most competitive of all the different contests. Each participant fully committee with their full strength to pull the “carcass.” In a few occasions, disputes arose, with participants appearing on the judging platform and angrily complaining. One or two times, another rider would join in the argument. The trio would then pull, gallop, turn, twist, sometimes even push their way through the crowd. Or set the horses again at full speed racing side by side, while the men pull the carcass.

Camel Race
The starting point of the race is far in the plains, so far we could at first only see the clouds of dust, but no camels. As they approached the finishing line, the enormous beasts pushed through the open terrain like nothing. Despite their size, they moved at a remarkable speed!

Best Dressed Men and Women
The costumes were all unique, a display of various customs and traditions, all high in colors, different styles of clothes and hats in comparison to the Mongol Kazakhs.
A Kazakh Festival for Kazakhs
Aside from the many tourists, the Golden Eagle Festival remains an important event for Kazakhs around the Altai region. Many Kazakh families attended, with kids playing around, and riding horses and camels alike. Many would shop at the stalls, try their end at the archery competition too. Or simply watch the contestants.

Traditional Kazakh Food
Yurts offer traditional Mongol staple of basically mutton, either rice or noodle. Hot tea was of course provided in all of them. Pasta and dumplings are made fresh right in the Ger/ Yurt. You might have to wait a bit during the lunch rush hour but it’s warm inside, and you can sip your hot tea while waiting.

Did you know?
This can be combined with our Altai Mountains trips for an extended tour.

See for yourself what this tour involves... 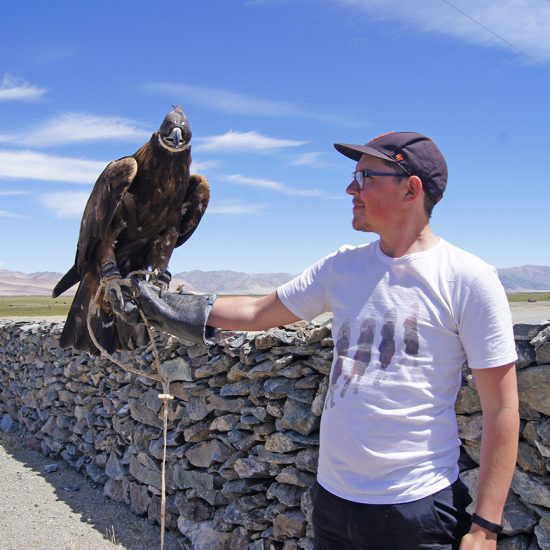 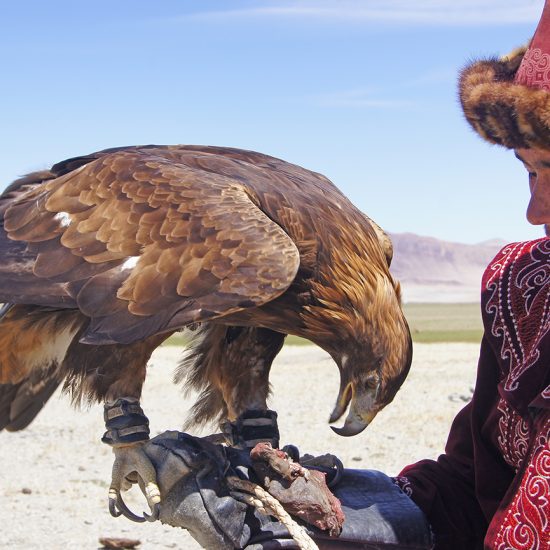 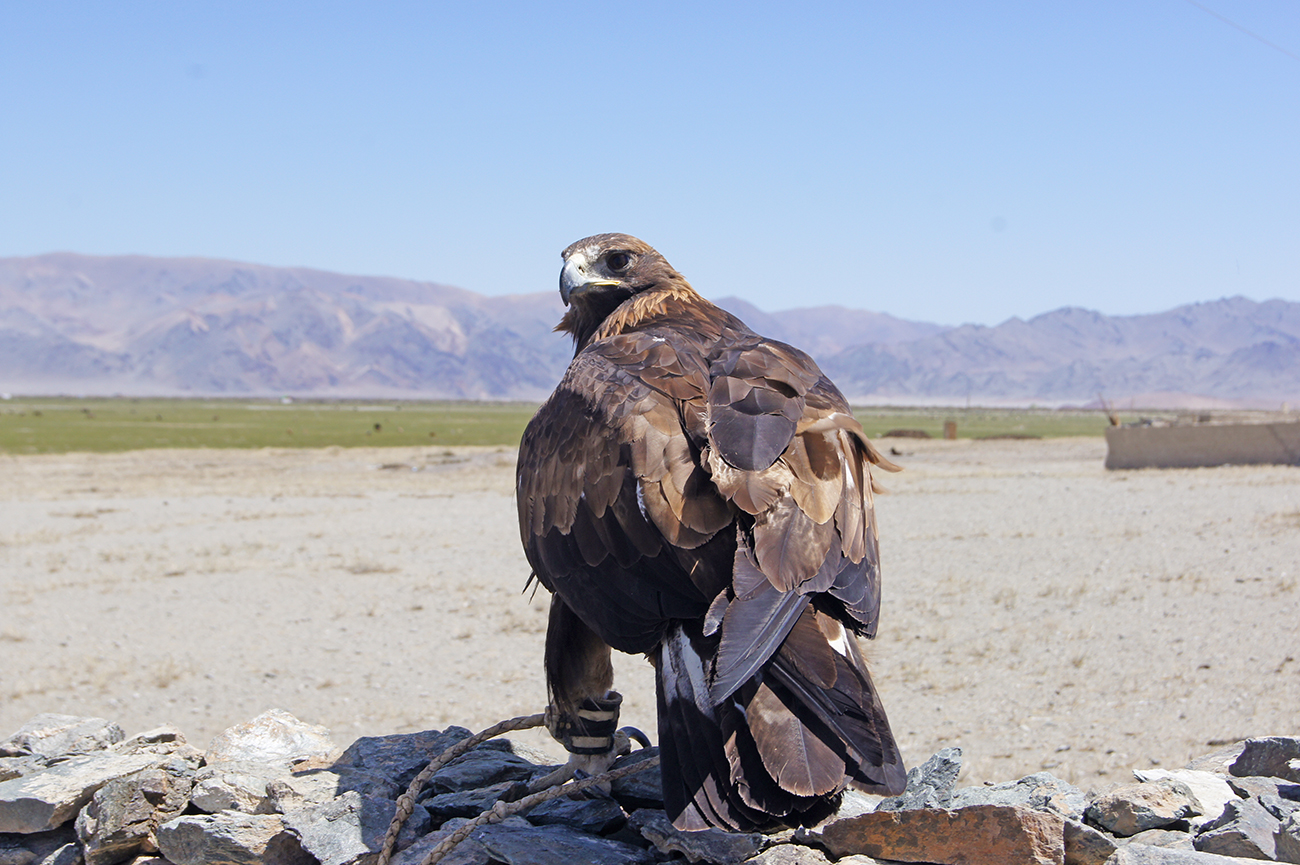 From Ulaanbatar, take a 3-hour flight to Ulgii City in the Bayan-Ulgii province in Western Mongolia. Your English-speaking guide and driver will welcome you upon arrival and introduce you to Ulgii, with its unique Kazakh culture and language (you'll be surprised to know that little Mongolian is spoken in Ulgii) and where the ancient Kazakh tradition of eagle hunting is revered. You will be checked into your very own embroidered Kazakh Ger. We will dine at local restaurants for lunch and dinner. (B/L/D/Ger)
2

Over two days, we will enjoy the Golden Eagle Festival, including: the Hunters parade - where they model their hunting outfits, accessories and traditional dresses and where hunters and their eagles compete, demonstrating the special relationship between the trainer and his bird. During this day you will see how the Hunters pamper their birds and cheer for them during the different challenges. Eagle Festival Activities: (B/L/D/Ger)
3

Day 4: Meet a Throat Singer and an Eagle Hunting Family

After enjoying two days at the festival, we will visit an Eagle Hunter's family. You will experience the hospitality of a nomadic family - sample their traditional food or their processed-by-hand dairy products. We will drive to Tsengel Village, where we will enjoy another unique Mongolian art - traditional throat singing. Then, we’ll enjoy lunch at a beautiful part of Tsengel, before driving to visit the eagle hunter’s family. Take the opportunity to use your translator to help converse with the eagle hunters, while they show you their training methods, and the art of eagle hunting. For over 2000 years, central Asian nomads have caught and trained the magnificent golden eagles to catch prey. Hunters catch young birds, preferring the bigger, stronger females. Then after eight to ten years, the eagles are released back into the wild to live free once again. Today you also have the option to ride with the Kazakh herdsmen - please let us know if this interests you. At the end of the day, we’ll then settle in for the night with the nomadic family. (B/L/D/Shared house)
4

The fourth day consists of a 180km drive. Enjoy the beautiful landscape of western Mongolia. We drive to the Shiveet-Khairkhan sacred mountain, where we'll see ancient petroglyphs. It is home to a large number of ibex and wild goats. We will also see a large Ovoo, a shaman shrine important to the local Tuvans and their shamanistic faith. Our accommodation for the evening will be with a nomadic family. (B/L/D/Shared house)
5

On the last day, we drive to Sirgali. Here, we see the beautiful, crystal clear, Khoton and Hurgan twin lakes, filled with plenty of fish and where many birds make home. The landscape around the lakes is picturesque, surrounded by snow-capped mountains and larch forests. We drive back to Ulgii through the Hovd River Valley, stopping to see deer stones, balbals, and Turkic stone men. Your last night’s sleep will be in a Ger in Ulgii. (B/L/D/Ger)
6

We say farewell as you fly back to Ulaanbaatar. 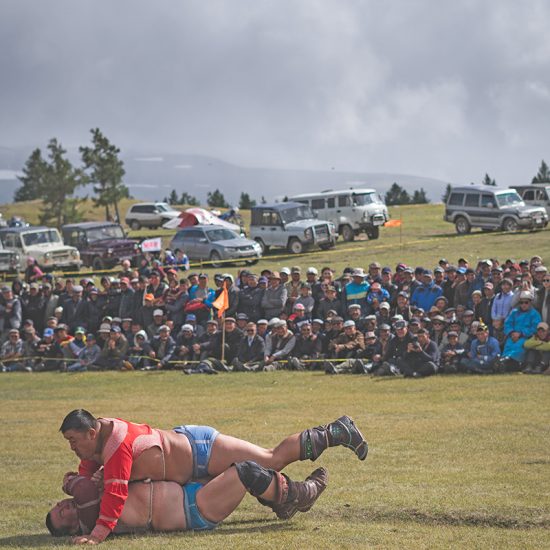 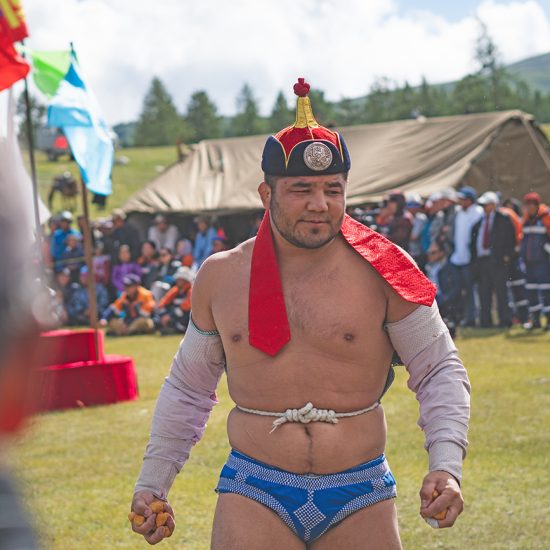 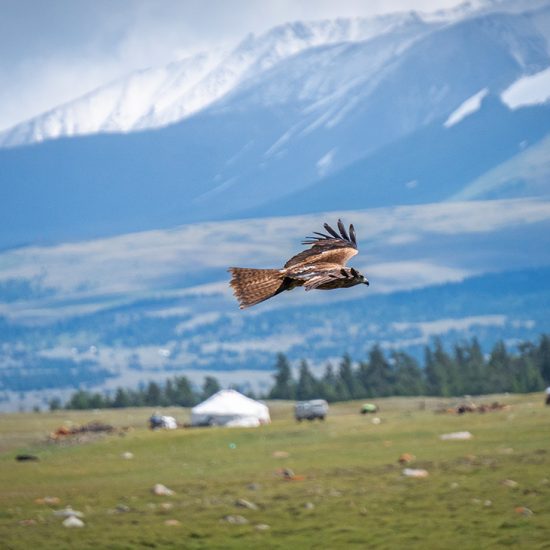 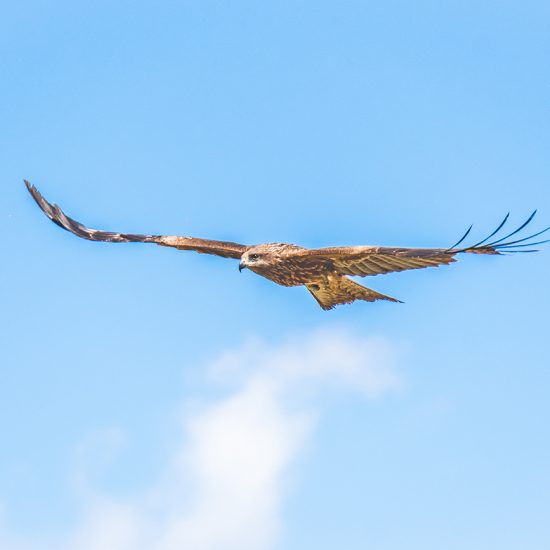 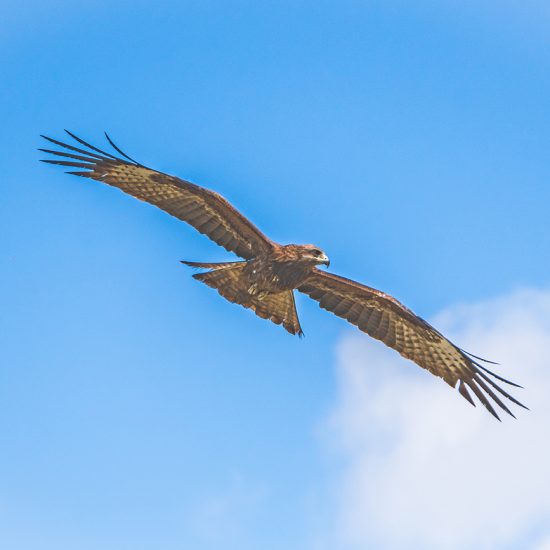 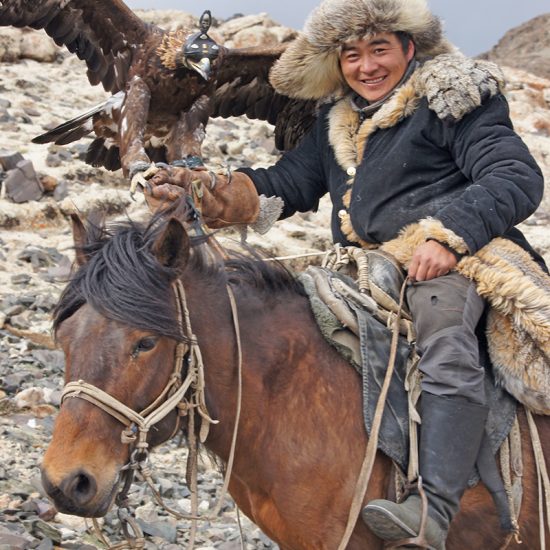 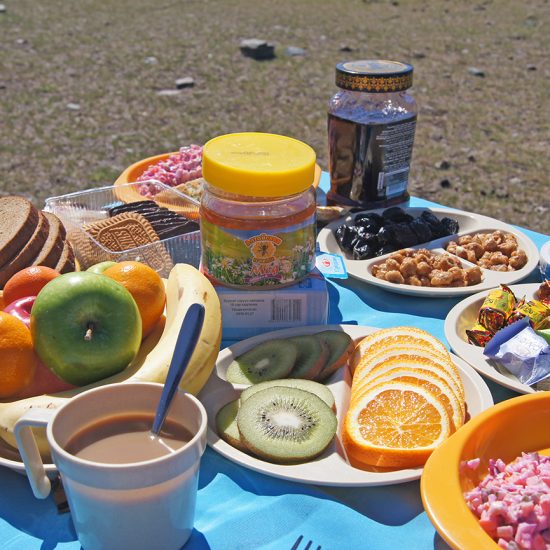 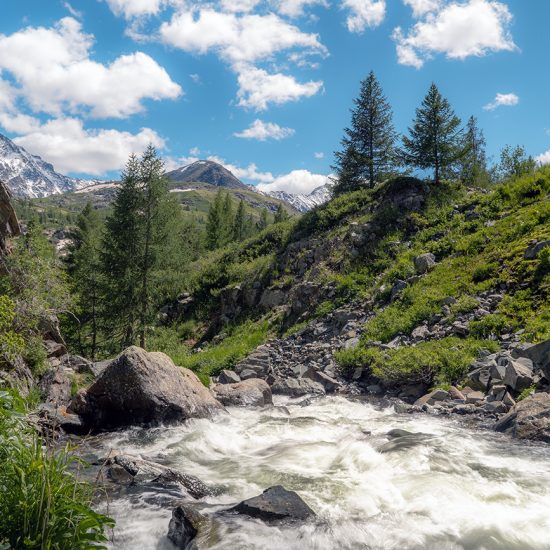 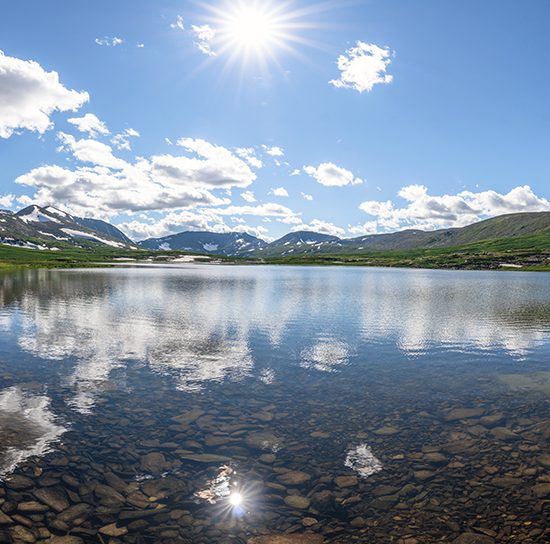 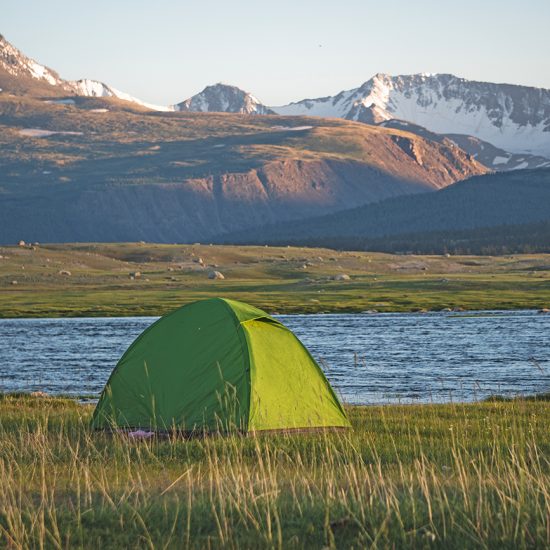 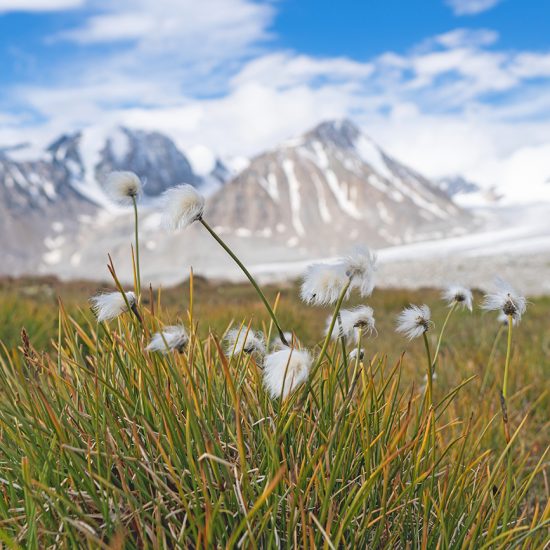 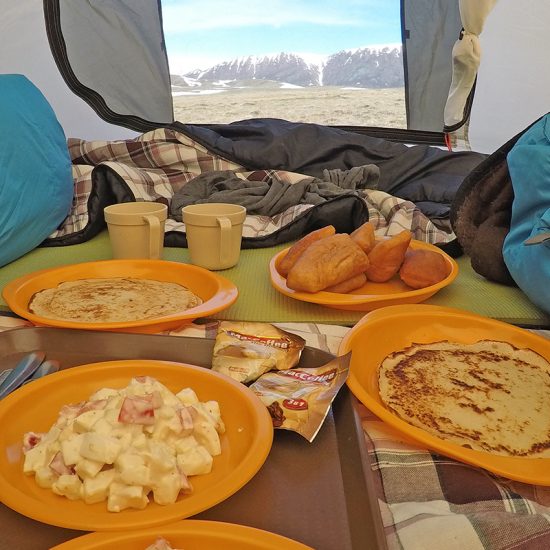 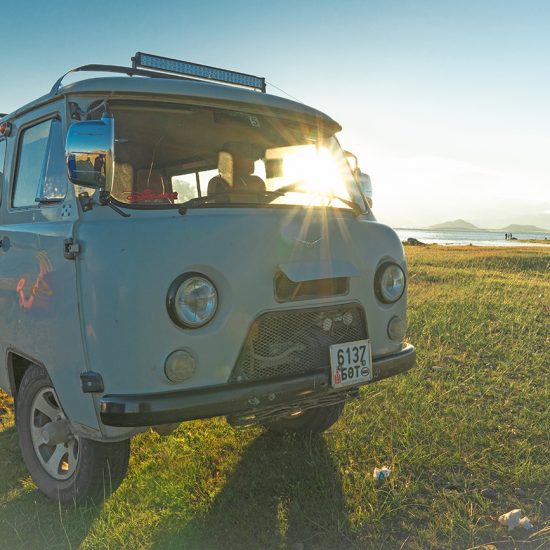 Note: The list above, whilst extensive, may not prepare guests for all situations experienced on the tour.
Package Price DOES NOT INCLUDE: